Major league sports in the U.S. date back well over 100 years, back to when Major League Baseball as we know it started in 1901 with the advent of the American League (the National League was founded in 1876). The growth hasn’t stopped over the past century by any stretch, but we wanted to find out which leagues bring in the most supporters, and which have the fastest-growing market share in 2023, based on Google searches.

By reviewing how a respective market has grown on Google from 2004 to 2022, we at BetMassachusetts were able to discover which leagues really illustrate market growth, and which have fallen short over the years.

Read on to discover how market share is changing in Massachusetts for the different major league teams, and how differently Google search data changed from years ago to now.

While we typically stick to Massachusetts sports betting here, stay close for research items such as this as well. 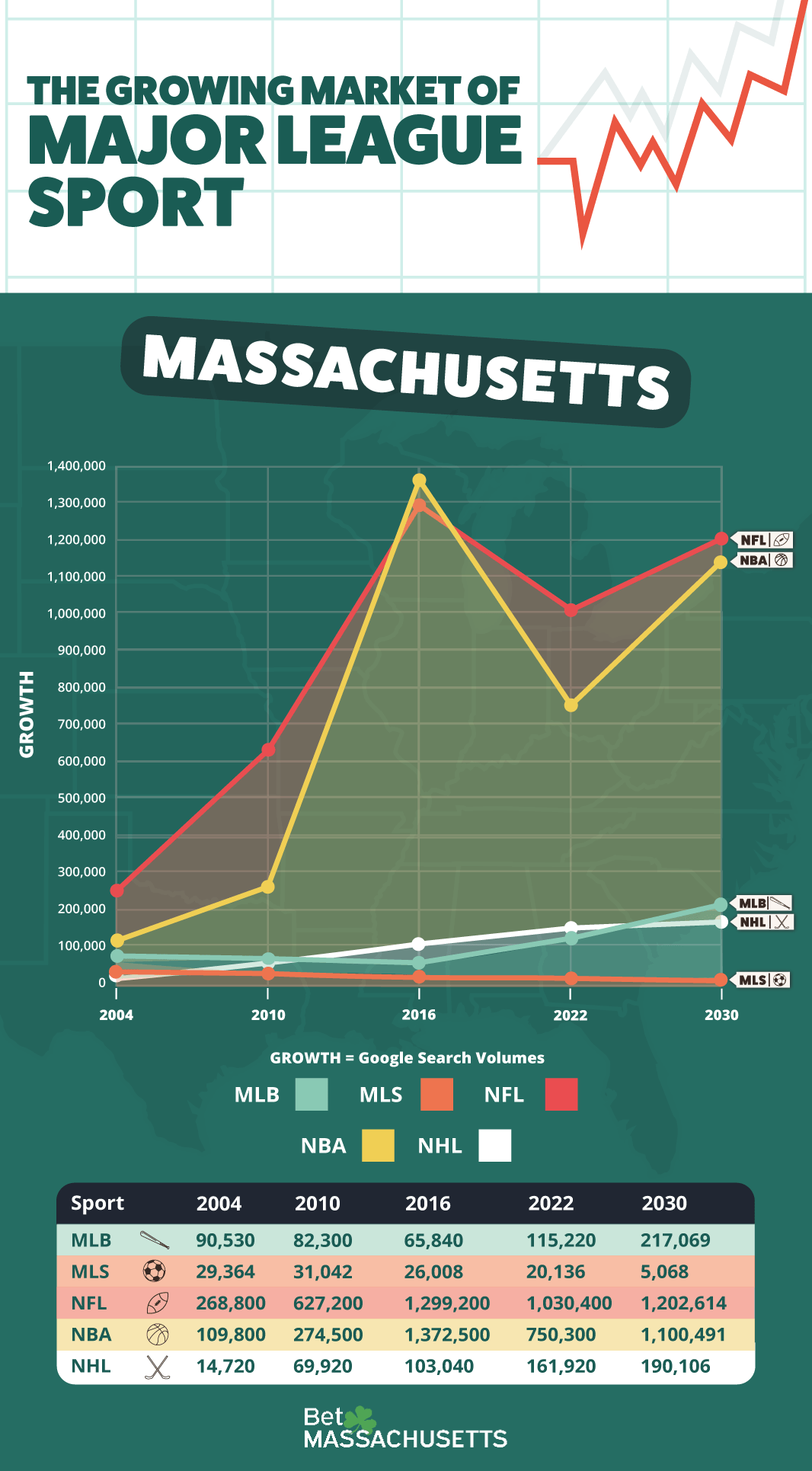 The NHL Makes Its Move

Percentage-wise, the NHL's market share has seen a whopping increase of 1000% since 2004 in Massachusetts. It helps that the Bruins are the second longest-running team in Massachusetts since 1924, with an ever-growing fanbase.

This 18-year market growth is huge across our model, and the Bruins can take the credit for this one, being the only Massachusetts team in the NHL.

The Bruins are also Stanley Cup Playoff regulars, and this current season could be one for the ages. The club has a dominant lead in the Atlantic Division, and has posted an astounding 22-1-3 record at TD Garden so far.

The Bruins visit the Toronto Maple Leafs on Feb. 1 in the first opportunity for bettors once retail wagering officially begins at three casinos on Tuesday, Jan. 31. Check back here for Massachusetts sports betting promo codes.

MLB Will See Biggest Growth By 2030

Despite the NHL seeing a substantial increase in market share from 2004-2022, it’s Major League Baseball that’s predicted to see the biggest percentage growth in market share in Massachusetts by 2030. That speaks to how passionate Boston Red Sox fans are, as they will be closely monitoring MA betting apps this upcoming season.

Chances are, there will be an 88% growth in the number of fans, which we forecasted from Google data searches, compared to the NHL’s growth for 2030 (17%).

NFL Has Room To Grow

As seen in the graphic above, the NFL has a huge fan base, and for good reason. Sports lovers adore Mass’ very own Patriots, with their stadiums packed full and morale remaining high despite the departure of Tom Brady several years ago.

The Patriots have also played in a whopping 60-plus seasons, winning six Super Bowls, and taking part in 11 overall since starting back in 1960!

In Massachusetts, the NFL saw a whopping 283% fan increase between 2004 and 2022, coinciding nicely with the dominant Bill Belichick-Tom Brady era.

But from the data we collected for 2022 vs. 2030, it’s clear to see that the Patriots already had over 1 million fans back in 2004, which could be why their percentage growth looks a little lower than other major league sports in comparison, with 17% of growing fan interest by 2030, compared to the MLB (88%) and the NBA (47%).

It'll be interesting to monitor the Patriots' Super Bowl odds at operators like Barstool Sportsbook Massachusetts next season with offensive coordinator Bill O'Brien back in the fold.

Since 2004, MLS Has Seen a Real Decrease

When comparing Google search data from 2004 to 2022, it seems that Major League Soccer is falling behind, with less than 31% of people searching for the Revolution.

Odds are, things won’t be getting much easier for this league either, with data between 2004 vs. 2030 predicting a whopping 83% decrease in market share.

The lower market share for MLS could be down to the performances of the Revolution. Although the Revs have been around since the first seaosn of MLS in 1996, the team has zero MLS Cup titles after five appearances in the final. That is a stark comparison to the Patriots, also owned by the Kraft family.

Keep it here at BetMass for more research like this and all the latest WynnBET Massachusetts promos ahead of the state's retail launch on Jan. 31 and online sportsbooks some time in March.

This dataset from BetMassachusetts.com compares the number of fans for each major sporting league (NFL, NBA, NHL, MLS, MLB) in the state of Massachusetts and forecasts their projected growth up to 2030 using search volume and Google trend data.

As search volume data is only accessible back to December 2018, the estimated search volume from January 2004 to November 2018 has to be calculated. Using the trend values as proxies, the equivalent search volume of the largest trend index value accessible could be found as far back as 2004.

If multiple months had the same largest index value, the one with the largest search volume would be used. This allowed for the calculation of the index estimated search volume (IESV) metric.

From there, the “=forecast.ets” function was used to forecast the IESV. This takes into account seasonality, which is necessary, as the sports will have peaks and dips at different times of the year, meaning a linear forecast cannot be used.

This was used to forecast the data to December 2030, using the previously estimated search volume from January 2004 to November 2022. 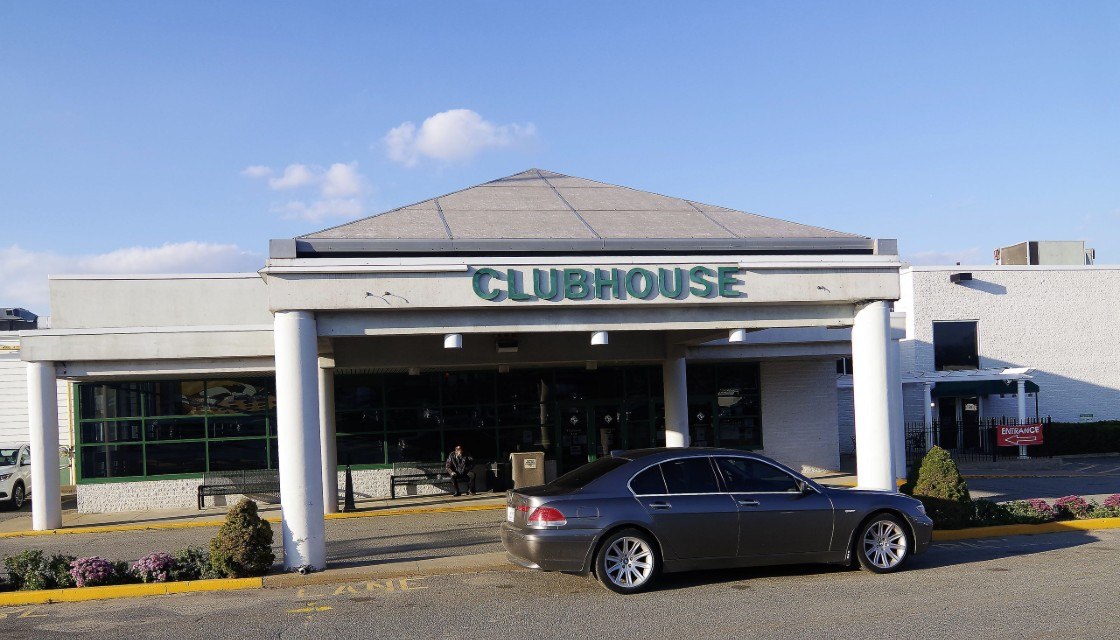