Wagering on sports does not have to relate solely to the outcome of a game. The best Massachusetts sports betting sites will offer you numerous opportunities to enjoy betting on over/under markets - let's take a detailed look at what is involved.

What Does Over/Under Mean?

Sports bettors enjoy getting closer to their favorite action, by staking money on the outcome, in a dazzling variety of ways. While wagering on the result of a fixture will always be popular, many players also enjoy the challenge of predicting outcomes in which it does not matter who actually wins.

Betting the over/under is arguably the best example of a way of gambling without even caring which team comes out on top. Over/unders are also known as totals because they relate to the number of times a particular occurrence will happen during a game or part of the game. This is usually the total number of points, goals, or runs scored but, as we will see, there are a sizeable number of markets that can be available if you want to bet over/under.

What is Over/Under in Betting?

So how does over/under sports betting work? It all comes down to opinions. You may have a strong sense of - for instance - how many points a team, or an individual player, will score in the match or in the first half or period. The sportsbook will also have an opinion, expressed as a total number. If you think the actual final total will be more than that figure, you bet Over; if your opinion is that it will be fewer, you bet Under. It really is as simple as that.

Let's look at an example of an over/under Massachusetts bet. When the New England Patriots face the Miami Dolphins, your sportsbook might suggest a combined points total for both sides of 44.5. If you fancy the Pats to let rip and win a high-scoring encounter, you will be able to bet on the Over at the best Massachusetts betting apps; if you feel it will be a low-scoring affair, the Under is the bet for you.

How Are Totals Bets Used in MA?

Why choose over/under betting? Massachusetts sports betting fans may have many reasons for selecting this option rather than a point spread or the moneyline. Maybe you think the sportsbook has the points spread odds exactly right and there is little value in betting on either side; perhaps you simply don't know which side will actually win the game. It's also worth looking out for Massachusetts sportsbook promos that allow you to wager with bet credits on an over/under line.

How to Read Over/Under Betting Lines in Massachusetts

There are certain subtleties that over/under betting Mass sports fans should be aware of. Over/under MA betting will look similar across all the major sports that the people of the state adore. However, to be really successful at this type of betting on each sport, a little research could be invaluable so that you are aware of the differences between them.

When you are asking "What is over/under betting?" one of the most important aspects to understand is the odds and your likely payout. Here we explain how they work.

The outsider in any two-sided bet should have odds that appear with a plus sign. If the Boston Bruins are +150 for their next NHL game, for instance, you will win $150 for every $100 you stake. If you see odds of +100, your profit will be the exact value of your wager. These odds are also called even odds and sometimes are labeled PK - which stands for "pick'em".

What Happens if Over/Under is Tied?

As you will have noticed from the examples above, most sportsbooks use half-point lines on over/unders. They do this to avoid the possibility of the total points, runs or goals scored matching the line exactly. This would happen if, for instance, the total line on a New York Jets vs New England Patriots game was 45 and the Pats won 29-16.

If a sportsbook does put up a number on an over/under that is matched exactly, this is known as a "push". In circumstances like this, operators like FanDuel Massachusetts will refund your wager.

The most popular over/under bet MA customers can expect to see relates to the total scored by both teams in a game - but there are plenty of other ways in which you can bet over/under on sports. These can be over/under player props, such as the total yardage gained by a New England Patriots running back, or first-half points scored in a game by a single Boston Celtics player.

There is nothing to stop you from combining several over/under selections in a single parlay bet. Your picks can come from a variety of games, or you can combine your totals bets with moneyline selections. As with all parlays, the prospect of a chunky payout as the odds are multiplied is exciting, but all your choices have to be correct for you to collect.

In choosing to play on the over/under, Massachusetts sports bettors are putting themselves in line for plenty of research - there is more than guesswork at play here. For instance, it has long been felt that the underrepresented value, is because so many betting customers subconsciously want to see an exciting, high-scoring game and bet accordingly.

It's important to be aware of any rules governing over/under bets at your sportsbook, while there are a host of factors to take into account when making your selection, including the teams' form and other analytics.

Does Over/Under Include Overtime?

This is a crucial question when weighing up an over/under bet - particularly in sports such as hockey when the scores are quite frequently level at the end of regulation time. Most sportsbooks do indeed include overtime in their over/under lines - which can make a complete mess of your calculations if you have gone for the Under. It is always worth double-checking with your operator to see what rules it applies to games that go to OT.

Virtually your first piece of research for an over/under MA bet should be the level of scoring - and conceding - the teams in the match in question have been achieving recently. Two teams in prolific form, or a pair of sides with leaky defenses, could make for a high-scoring match-up. However, if you are looking through recent results to see how many - or few - points a team has been recording, you can bet your sportsbook is doing the same thing and will set its total accordingly.

This is a fascinating statistic that can impact directly for an over/under bet Mass bettors might want to stake. It is used by analysts of the NFL and, in particular, the NBA. The question is, how many times does a team have possession during each game - and is that more or fewer than the norm? Obviously, a side that has a faster game pace than average is likely to score more often, meaning there is a strong case to bet on the Over side of the line.

Line movement describes what happens when the total put up by a sportsbook on an over/under bet changes. This can occur for a variety of reasons, such as late absences through injuries to key players or a sudden change in the weather, but it can also be caused by an imbalance in the number of bets placed on the Over or the Under. By moving the line, a sportsbook tries to make the other option more tempting in the hope that more wagers will flow in that direction. As you become more experienced, you will know when to bet to get the best odds with a particular operator.

How the Over/Under is Determined in Massachusetts

As you can see, there are numerous factors to apply when weighing up an over/under Mass bet. The need to weigh these different considerations applies both to bettors and to sportsbooks. Operators like BetMGM Massachusetts will spend plenty of time setting the over/under line; they will revisit previous meetings between the teams and their recent form before deciding on the odds.

All bookmakers thrive on information, and news of injuries, suspensions, and even the likely weather conditions will go into the mix before a sports betting company releases it's over/under lines.

Get Started Over/Under Betting in Massachusetts

Now that you understand how this type of wager works, you are ready to savor the joys of the over/under betting Massachusetts has in store. If you visit the websites of leading operators such as Massachusetts BetMGM and Caesars sportsbook Massachusetts, you will find numerous opportunities to get involved in this type of sports betting.

An over/under wager is a great way to have a stake in a game where you have no emotional ties to either side or cannot decide which team is going to win. When you bet over/under, that simply does not matter.

What does over/under mean in betting? Exactly what it sounds like. You have a simple choice; will a certain thing happen more times than the total put up by your sportsbook, or fewer? Use your judgment, do your research, and enjoy the experience of placing over/under bets.

If the combined number of points scored by both sides in a game matches exactly the total set by a sportsbook, this is known as a "push". In these circumstances, all bets are refunded. To avoid this, most sportsbooks use half-point lines to make it impossible for the total to be matched exactly.

Yes, they normally do - which can spell disaster for a carefully researched under bet. It is always worth checking with your chosen sportsbook that an over/under bet includes any scores in OT, but in virtually all instances you should expect that it will.

There is no hard and fast rule, but historically there is more value on the under side of the line. This is because many bettors automatically hope they will see an exciting, high-scoring game. Sportsbooks are aware of this trend and may move the line accordingly if there are far more Under bets than Over.

Yes, you can. Your sportsbook should allow you to combine several over/under bets in a parlay, or to mix up, your over/under picks with moneyline wagers. You can even include over/under selections in a same-game parlay or live betting during a game. 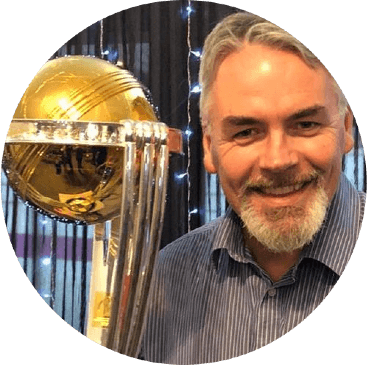 An award-winning contributor covering sports betting and casino gaming around the world for decades, Martin Booth is one of the most trusted voices in online gambling. From legislative updates to breaking down the top betting apps, Martin covers a gambit of topics for BetMassachusetts.com.