At times, it is extremely difficult to secure a sports ticket in Massachusetts, especially when the best teams are among the world’s most renowned franchises. Numerous fans not only in the Bay State but all over New England want the chance to experience the likes of the Red Sox, Celtics, and Patriots live and in person. In some cases, teams may have huge season ticket waiting lists of 10-20 years. That’s even more true as Massachusetts sports betting is finally on the horizon.

But what is the true cost to fans when they’re finally given the opportunity to buy a season ticket for their favorite team?

We’ve assessed the average salaries, tax, and cost of living in Boston, Salem, Worcester, Cambridge, and Plymouth, to discover how many working hours it typically takes fans to afford tickets at Massachusetts’ top teams.

And when everything does launch in the state, check back here to stay updated on all the top BetMGM Massachusetts promos. 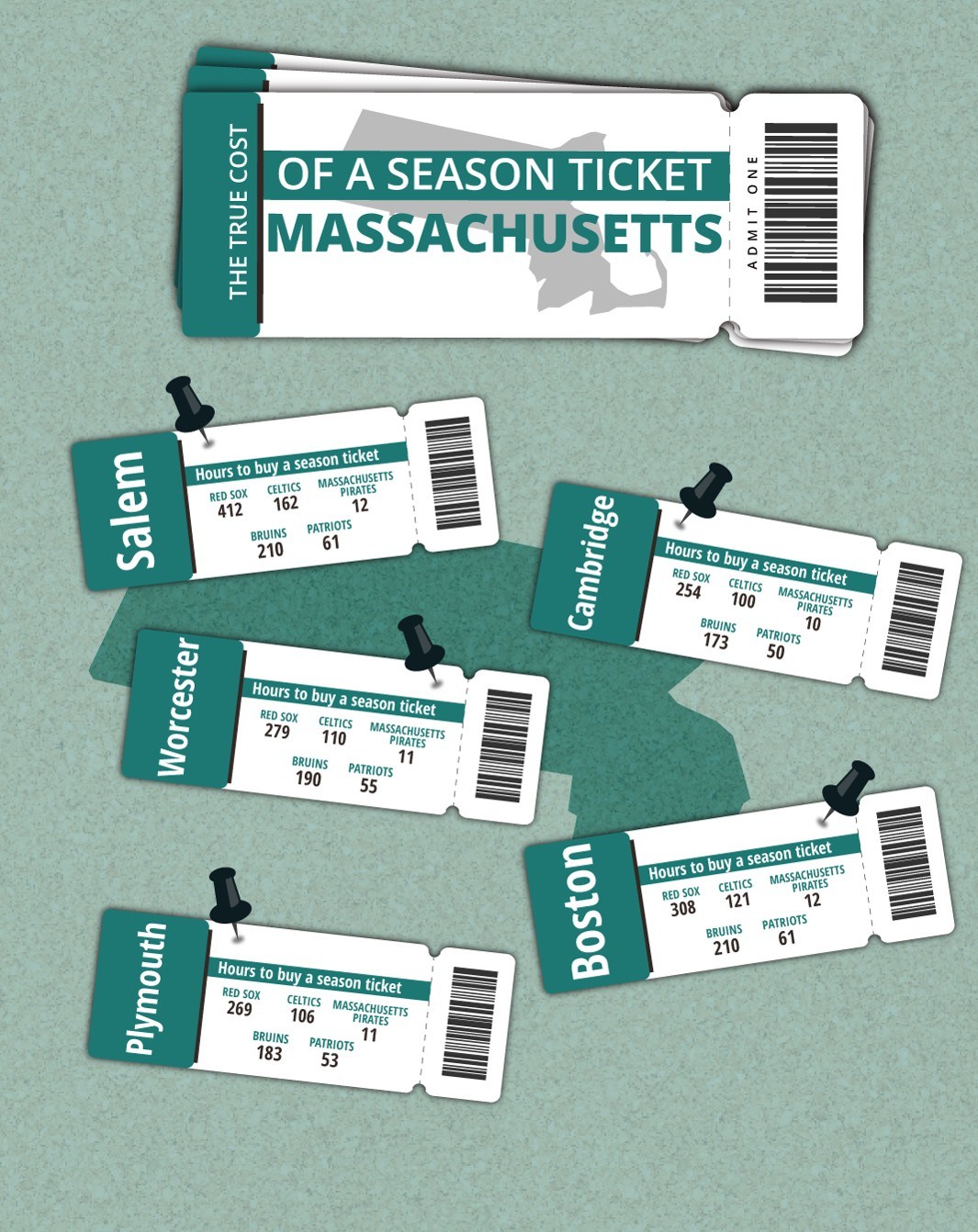 To earn enough money to buy a Red Sox season ticket in Boston, the average worker would need to clock in a remarkable 308 hours. Meanwhile, a Celtics season ticket (121) typically takes half the time to earn, albeit 10 times longer than the 12 hours it takes to earn enough to buy a season pass for the Massachusetts Pirates of the Indoor Football League, based in Worcester.

Fans of the NHL’s Bruins fans will need to work 210 hours, more than three times longer than they would to see the NFL Patriots (61 hours) in Foxboro.

Salem sports supporters have to work longer than any other set of supporters in major cities across the state, partly because they have the lowest possible rate of disposable income in Massachusetts.

Amongst the state’s five biggest cities, Worcester sports fans rank third in terms of the time it takes to buy a season ticket. For instance, Red Sox supporters are required to work an average of 279 hours to afford a season pass, while Bruins fans typically work 190 hours. Celtics supporters work 110 hours, followed by fans of the Patriots (55) and the hometown Pirates (11).

Once wagering on sports goes live in Massachusetts, fans in Worcester and statewide can turn to BetMassachusetts.com for information on the top Massachusetts sports betting apps available.

The highest average rate of disposable income in Massachusetts goes to the supporters in Cambridge, meaning Red Sox fans here only need to work an average of 254 hours to afford a season ticket.

Plymouth has the second-highest rate of disposable income in Massachusetts, behind only Cambridge, so Red Sox fans will only need to work for 269 hours to buy a season ticket, followed by those of the Bruins (183), Celtics (106), and Patriots (53). Finally, it’ll take just 11 hours to earn enough to buy a Pirates season ticket – or just a couple of working days for most.

It’s interesting to see how much the honest value of a season ticket depends on where you live, with average salaries and the rate of disposable income varying dramatically across Massachusetts. For more expert insight like this, as well as the latest odds, picks for your favorite teams and MA sportsbook promos, keep checking with us at www.betmassachusetts.com.