Patriots' Mac Jones Among NFL QBs Who Capitalized On Instagram

With the NFL regular season coming to a close, there have been some seriously stand-out quarterback performances for fans to enjoy, with Patrick Mahomes delivering another impressive season for the Super Bowl hopeful Chiefs.

Performing well during the NFL season can also have benefits off the field, though, with the likes of Mahomes and undisputed GOAT Tom Brady both having a massive following online. In fact, social media can even play a part in the recruitment process nowadays, with franchises regularly checking in on the profiles of the latest round of incoming rookies.

To reveal the impact being a quarterback can have on an Instagram following, the team at BetMassachusetts.com has collected data for 15 high profile QBs who were all active during the 2022-23 season. The team tracked the number (and percentage growth) of follower increases over the course of one year from the regular season pro debut of said QB.

Note that not all current quarterbacks were analyzed, as the likes of Brady and Aaron Rodgers, to name a few, made their pro debuts well before Instagram launched.

Stay close to this site for research items such as this, as well as everything related to the launch of all legal Massachusetts sportsbooks.

Patriots quarterback Mac Jones saw the third-largest Instagram follower growth in the year after his debut among all QBs studied.

Selected during the first round of the 2021 draft, Jones clearly made a quick impact online, with his following growing from 417,300 on the day of his first career start to 659,600 approximately a year later – a substantial growth of 58%.

Finishing his rookie season with 3,801 passing yards, 22 touchdowns, and a 67.6 completion percentage, Jones received Pro Bowl honors, making him the Patriots’ first rookie quarterback to do so.

Jones has had a solid start to his career, however, his performances throughout the 2022 season left room for some improvement after he struggled without former Pats play-caller Josh McDaniels.

Which Other Quarterbacks Make the Cut?

Of course, there are other quarterbacks who really managed to make their presence known online. For reference, of the most recent 15 NFL debutants who played in the 2022-23 season, the average Instagram follower growth one year after making their first career start was an increase of 118.6k (or 63%). 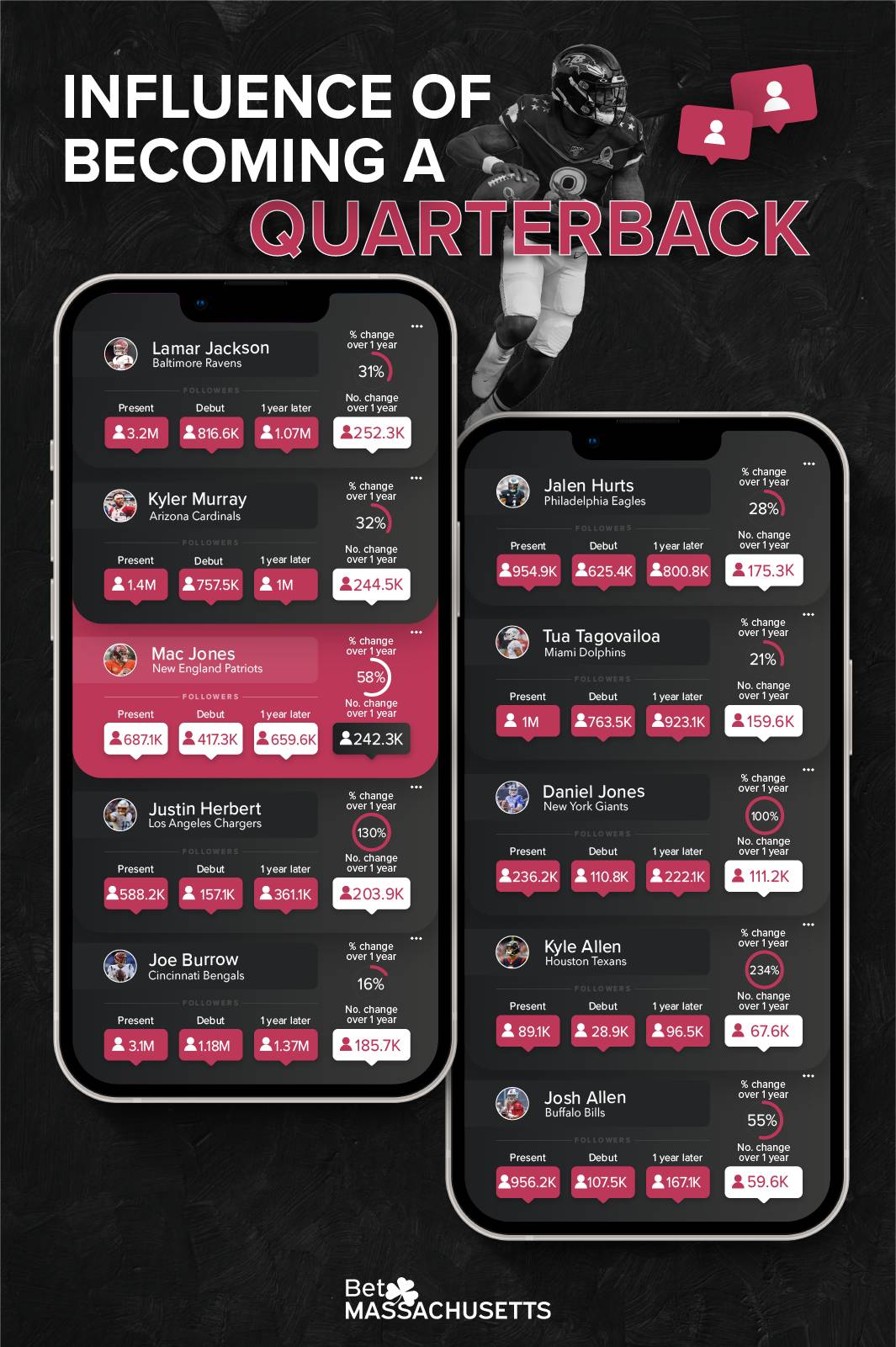 After analyzing the social media accounts of each quarterback, we can reveal that Lamar Jackson was the NFL’s most influential rookie quarterback on Instagram, having gained 252,300 followers in the 12 months after his debut – a growth of 31%.

Drafted by the Baltimore Ravens in 2018, Jackson made his first appearance against the Cincinnati Bengals following an injury to starting QB Joe Flacco halfway through his rookie campaign. Jackson went on to have a strong 2018 season, resulting in the coaching staff creating a new offensive philosophy centered around his specific skills .

One year on, Jackson led the Ravens to a 14-2 record and unanimously won the MVP award for the 2019 season.

Jackson is in his fifth season for the Ravens, and he is set to become a free agent once the season is over.

However, if the power of social media is to be believed, then this shouldn’t be too much of an issue, as his following currently stands at 3.2 million. Once the state officially launches, expect Jackson to be a MVP favorite next season at BetMGM Massachusetts.

Kyler Murray, quarterback for the Arizona Cardinals, just missed out on the top spot behind Jackson. With a follower growth of +244,500 in the year after his first career start, Murray managed to reach one million within 12 months – and, as of January 2023, currently has an astounding 1.4 million.

Murray was the first pick in the 2019 NFL Draft and had a successful year starting all 16 games. Named NFL Offensive Rookie of the Year, Murray threw for 3,722 yards, 20 passing touchdowns (and 4 rushing), leading him to be named to the Pro Bowl.

Unfortunately, Murray had one his worst performing years with the Cardinals this season. Adding that to his season-ending ACL injury against the New England Patriots, which also may jeopardize the 2023 season, this year is likely one to forget.

When he does return to the lineup, Murray will be with a new play-caller following Kliff Kingsbury's firing.

He could be a candidate for Comeback Player of the Year at Massachusetts sports betting apps should he perform well.

Beginning his NFL career in 2020, Herbert was thrust into becoming the Los Angeles Chargers starting quarterback during his rookie season due to an injury to Tyrod Taylor. In his debut season, he broke multiple rookie records, including the most passing touchdowns (31) and most completions (396), which led to him winning the NFL Offensive Rookie of the Year award.

In terms of the 2022 season, Herbert is still looking strong, and will make his playoff debut this Saturday against the Jacksonville Jaguars (8:15 ET, NBC).

Another No. 1 draft pick, Joe Burrow, rounds out our top five. Boasting an already impressive 1.18 million followers on the day of his first career start, this increased by +16% to 1.37 million within his rookie year, and as of January 2023 sits at 3.1 million.

Considered the favorite to win the NFL Offensive Rookie of the Year, the hype surrounding Burrow was great, but he had a difficult rookie season thanks to his season-ending injury during Week 11. Despite this, Burrow still put up some solid numbers, throwing 2,688 yards and tossing 13 touchdowns.

Burrow came back with a very strong 2022 campaign to say the least, leading the Bengals to the Super Bowl for the first time since 1988. As a result, he'll likely be a popular MVP bet at WynnBET Massachusetts for the 2023-24 campaign.

For this campaign, the team analyzed the Instagram accounts of the most recently debuted NFL QBs who started the 2022 season, ranking them in order of followers gained one year on from their first career NFL start.

Stay tuned to BetMassachusetts.com as the dates for both retail and mobile sports wagering draw closer.