The Odds of Owning a Home in Massachusetts

Owning property and being able to call your home your own is something many of us dream of. But in a state with one of the least affordable costs of living in the United States, what are your odds of being able to buy a home in Massachusetts, and how do your chances here compare to neighboring states?

To determine your odds of owning property in the Bay State, we considered a series of factors including the state’s income-house value ratio, Massachusetts house price growth, the number of households here per 1,000 people, and the home ownership rate across the state.

Ranking each state for each factor, we were able to reveal where Massachusetts places among places to purchase property.

And remember, all things are moving ahead to launch retail sports betting in Massachusetts in January 2023.

How Easy is it to Buy Property in Massachusetts?

According to our research, with an overall index score of 36.5 out of 100, Massachusetts is among the hardest states to buy property in, ranking sixth bottom ahead of only New Jersey (36.1), Alaska (35.4), New York (32.3), California (18.3), and Hawaii (16.8). That wouldn't make for great odds with operators like DraftKings Sportsbook Massachusetts when the state goes live early next year.

Notably, there’s also a scarcity of households per 1,000 Massachusetts residents, with just 371 currently, just below the national average of 374.

Additionally, Massachusetts has a relatively low rate of home ownership, with just 61.66% of people owning property here, the fifth lowest of all US states. 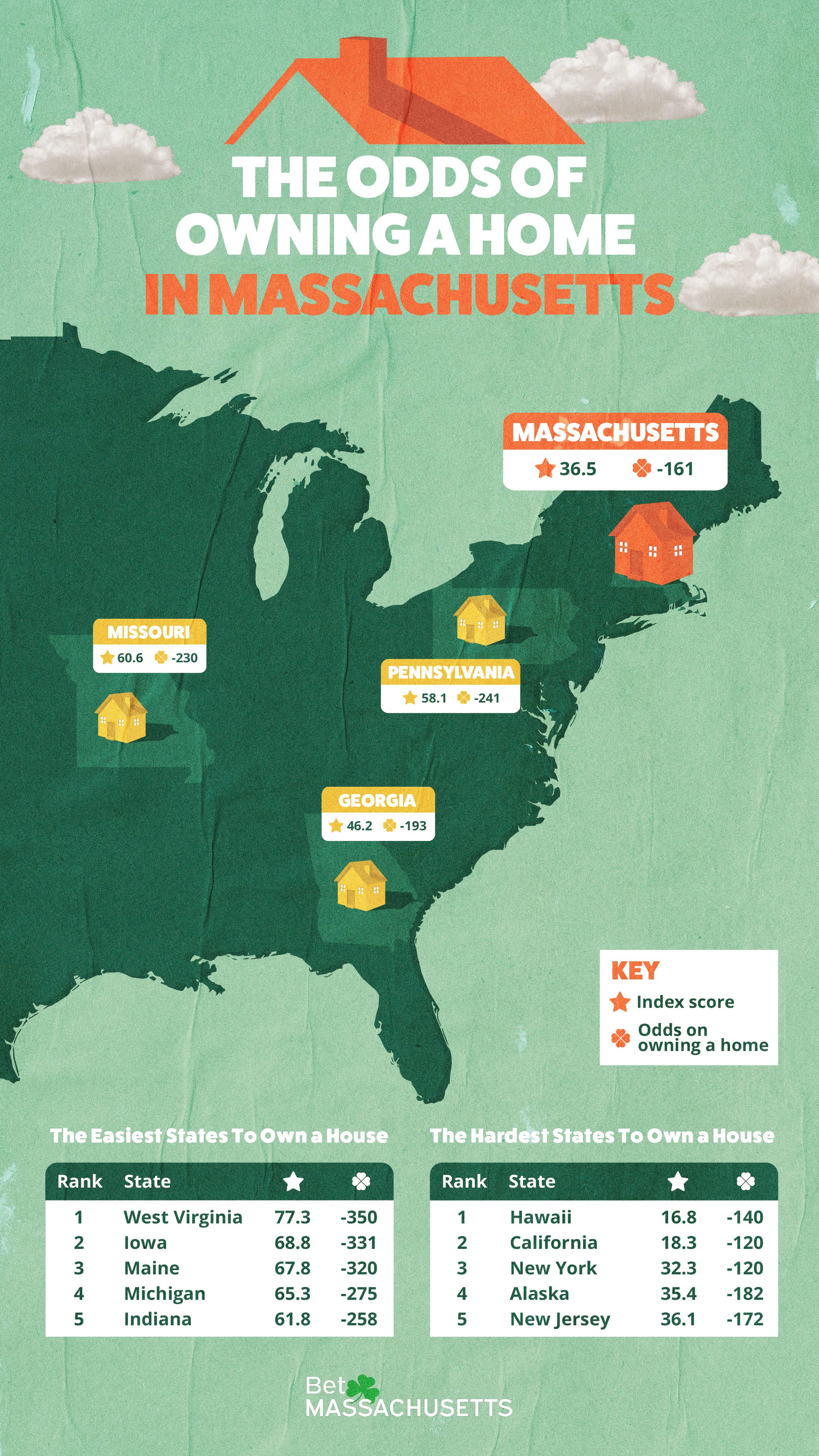 What are Your Odds of Buying a Home in Massachusetts?

However, despite this, your chances of becoming a Massachusetts homeowner are generally favorable, with moneyline odds of -161.

This means, statistically, you’re much more likely to be able to afford property here than not!

Stay with BetMassachusetts.com to follow the road to mobile sports betting as well as find MA sportsbook promos.

To determine the how easy it is to buy property in Massachusetts, we considered four different factors for each U.S. state:

Data for these factors was collected and normalized, to give each factor an indexed value between 0 and 1. These values were then summed, to provide a total score out of four for each state. The states were then ranked from highest to lowest based on this score.

To determine your odds of owning a home in Massachusetts, we looked at the home ownership implied percentage and equivalent moneyline odds.